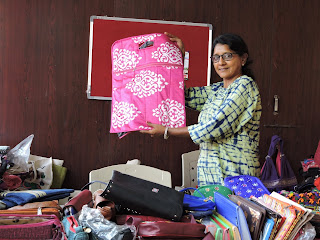 There’s nothing wrong to stay as a successful small enterprise.
Every beginning has a hard start, only people who work hard at it will succeed. Here is a story of Mrs. Mamatha Mallur a home based multivariant product reseller based at Hubballi Karnataka. Her business ideas routed from her mother’s business motivation during the year 1974. Mrs. Mallur took over her mother’s business forward in the year 1996. In her path of journey, she came across many struggles which made it difficult for her to sustain in the business market with less experience and expertise. Her husband and her family members constantly supported and encouraged her to grow in the business.
Though she was facing difficulties in her journey to success, she was able to acquaint multivariant products like Solapur Chaddar, Mobile Pouches, Saree Covers, Fridge Cover, Washing machine cover, Solapur Carpets, Trolley Bags, Cotton Bags, Handbags, and Rajasthani Purses etc. Her products are purchased from multi cities like Solapur, Hyderabad, Pune and Jaipur.
During her business struggle she came across Navodyami Entrepreneurship development program where she enrolled for this program. She was exclusively trained on accounting management and marketing tactics strategies from various mentorship experts. As a result, she was able to manage her business by participating in Navodyami’s specialized exhibitions (Santhe) which made her business thrive in multiple profit aspects.  She describes her participation at Navodyami program as very beneficial, better market links, which consequently lead to a growing customer network and improved account management skills which made her journey successful. As a result, she started to invest nearly Rs. 50,000/- in the business which increased her turnover from Rs. 20,000/- to Rs. 50,000/- per month. Now she acts as an active participant in all the Navodyami Exhibitions where she draws higher profit for her products.
As a growing entrepreneur she thanks Navodyami for the constant support and encouragement. And now with her strong motivation she has a vision for her own shop with multivariant products as soon as possible.
#Navodyami
#Deshpande_Foundation
#join_your_hands_with_Indias_largest_micro_entrepreneurship_program
#small_scale_entrepreneur


An interactive session with the panel which chaired one of our Navodyami entrepreneur Mrs. Sumitra Navalgund from Dharwad who shared her wonderful experience & her association with our program. Her inspirational words & journey was witnessed by over thousands audience present during the Evening with legands,@ Infosys Hublicampus.http://www.navodyami.org/#join_your_hands_with_Indias_largest_micro_entrepreneurship_program#small_scale_entrepreneur#Navodyami
#Deshpande_Foundation
#navodyamiorg
#Mentorship
#Navodyamisanthe
#MadeinIndia
Deshpande Foundation
at February 11, 2019 No comments: Links to this post 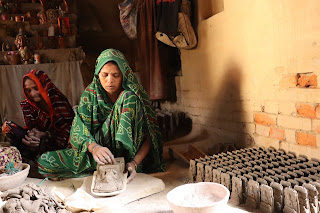 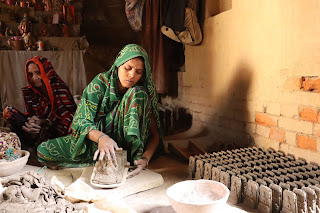 They say it is better to fail in originality than to succeed in imitation. – Herman Melville” A life story of an entrepreneur who fulfilled her dreams to reality. Saroja devi, wife of Rajesh Prajapati who is a Navodyami awardee of 2016 is a terracotta artisan from Sultanpur village of Sarnath. Before joining Navodyami, she used to make conventional terracotta items like diyas and cups which was sold at a very less price in the ordinary markets. Lately after joining Navodyami program she gained market exposure and got to know that she can design several other terracotta items which can be sold at a higher price. She carries a total of 12 years of experience in this field. She along with her husband owns the business. Her staff size has grown from 8 to 14 people and her monthly income has increased from Rs. 2000 to Rs. 20,000 after joining Navodyami program. Her daily production is around 20000 pieces and her business reach are till the territory areas of Nepal, her husband plays a vital role in her life he acts as a major supporter to her. Down the pike she wants to increase the market base and increase the market transactions to a next level.
Navodyami
http://www.navodyami.org/
#join_your_hands_with_Indias_largest_micro_entrepreneurship_program
#small_scale_entrepreneur
#Navodyami
#Deshpande_Foundation
#navodyamiorg
#Mentorship
#Navodyamisanthe
#eksochsandbox
@eksochsandboxek soch sandbox
at January 15, 2019 No comments: Links to this post 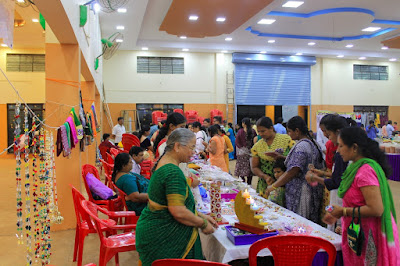 Jayashree at her stall in Navodyami santhe, showcasing her handcrafted products

Mrs. Jayashree (68 years) & Mrs. Laxmi (28 years), launched a small business venture in 2016. With no background in business and lack of formal business education, they were unsure about how to proceed. The founders initially invested less than Rs. 10,000/- as the operating capital of their business. They produced handmade products like torans, haldi kumkum platters, door hangings but marketed without any brand name. They realised the need of improving their business competency without which it was difficult to thrive amongst competitors.

2017 marked a turning point in their lives when the founders approached Deshpande foundation Navodyami program for business growth suggestions.  They finalized the the name ‘Kalanidhi’ for their business venture. They were relentless in their efforts towards betterment and Navodyami was committed in helping them scale up. Not only did they attend the 2-day Entrepreneurship Awareness Program and the 5-day Entrepreneurship Development Program, these Disha beneficaries made sure to avail the benefits of different Navodyami programs like Santhes, Karyagaras, Sammelanas to learn the ground realities of business. The trainings and advice from Navodyami mentors armed them to face the challenges of business sustainability.
Disha is a partnership between the India Development Foundation and UNDP, supported by IKEA Foundation, that aims to support one million underprivileged women in India learn marketable skills and connect with income opportunities.

They soon had a large marketing network involving higher profit margins. Navodyami santhes proved to a boon for them, with Kalanidhi Arts & Crafts gaining a turnover of Rs 8,000/- to Rs. 11,000/- per santhe. Now, Kalanidhi has its loyal clientele who have helped them in further expanding to different locations. The venture initially was centered around Dharwad, but has successfully expanded in Belagavi & Hubballi. The founders aim to establish their own arts & crafts store dealing in indigenous, handmade products.

Navodyami has given my snack a great popularity in all the local markets says : Pramila 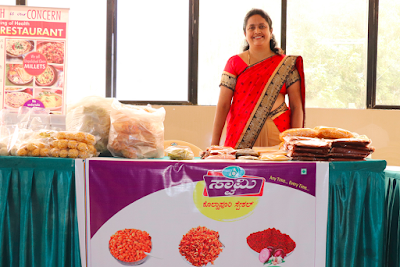 Pramila with her popular food products in Navodyami Santhe

Born into a well-off, traditional family in Kolhapur, Maharashtra, Pramila hadn’t faced economic hurdles till a very late age. Married to a doctor and mother of two beautiful daughters, she was comfortable in her life. When her doctor husband passed away due to a cardiac arrest, not only was she emotionally shattered, but also confronted with the big question of means of survival. With the sudden demise of the sole bread earner of the family, she became dependent on her extended family for financial support.

But as a self respecting, strong woman, she chose to step into the utterly alien business world. She had studied up to higher secondary levels and did not have any formal business education. But it did not deter her from starting a business at the age of 50. On her brother’s advice, she started a small business from her home, selling Bhadang (puffed rice chivda), a traditional Maharashtrian snack. The popular snack gained appreciation in her friends’ circle in Hubli which boosted her confidence. It was during this initial phase that she got to know about Navodyami ‘santhes’ - platform for micro and small micro-entrepreneurs to exhibit and sell their products. Santhes are a part of the Disha pilot program. The Disha program aims to reach out to 10,000 existing and aspiring entrepreneurs, provide entrepreneurship development training to 3000, and incubate 1000 sustainable women entrepreneurs.

Pramila’s interaction with the Navodyami team and other micro-entrepreneurs fueled her desire to expand her business. She enrolled as a member of Navodyami and started her journey of entrepreneurial learning as a Disha beneficiary.

Talking about her business growth, Pramila says “I started my entrepreneurial journey with the popular snack of Maharashtra called Bhadang, which my brother used to send me from Kolhapur. Initially the demand was low, and I would source 20 – 30 kgs of Bhadang. After participating in Navodyami Santhe, I met more potential customers. My food product got a huge response and people loved the product. Orders started pouring in. I participated in two Navodyami Santhes, and soon after, people started recognizing me and my product. Now, I manage to sell about 100 to 150 kilos of Bhadang on an average every fortnight. Expanding my range of products, I have also started stocking up on Kandalussunchatni , a unique masala chilli powder, turmeric powder, Goda masala (use to prepare vegetable curries and Pulav). Apart from this, I am also trying to sell bhel and other varieties of snacks”

With growth in her business and selling capacity, Pramila has bagged a contract to serve Bhadang as a snack in Jain Heritage International School, Hebbal, Bangalore. The response has been very good and is giving her opportunity to venture into newer markets.

Emphasizing about Navodyami’s role in her success, Pramila says, "No other organization could have done it the way the Navodyami team has cooperated, supported and trained me to be an entrepreneur. Through the 5 day EDP training given under Disha, I have received inputs on how I could better manage my accounts and use resources properly. I do not feel like an early-phase entrepreneur clueless of what I should do next. instead I am confident and I can also motivate other women like me who need timely support at the most crucial phases of their lives."


·Mr. Vishwanath Kenchi is weaving hand loom cotton cloth in Gajendragad and he started one Co- Operative society supported by Charka organization. There were 20 weavers working in the Hand loom Society then he planned to increase hand looms in Gajendragad. He gets every month yarn from the Charaka Organization for weaving and gives back to ready cloth to Charka Organization. He thought to apply Navodyami program to get financial support from the Deshpande foundation.

He attended the Navodyami training and he satisfied with Navodyami training because he never got training for his Business development. After the Navodyami training he selected as a winner in Navodyami program and received 1 lac rupees as Navodyami winner. He installed 10 more hand looms and now he weaves cotton cloth per day 240 miter, per month 7200 miter cloth.  He gives cloth to charaka organization and navodyami team has supported him to get market linkage for his product.  He has increased cloth production in his hand looms cloth weaving business and now100 labours are working in his small industry
at May 28, 2013

There’s nothing wrong to stay as a successful small enterprise. Every beginning has a hard start, o...

About Navodyami
Hubli, Karnataka, India
Navodyami program works to make micro-entrepreneurship a viable proposition as a livelihood. Currently, challenges of a micro-entrepreneur venturing into an enterprise are far too many. Often times meager sources of income, few assets, simultaneous pressure of supporting family while stabilizing an enterprise and absence of guidance makes ‘risk taking’ for micro-entrepreneurs much more difficult than for a large entrepreneur. Navodyami Program takes on these challenges and creates an enabling condition for those who like to turn their ideas into action. Through training, mentor ship we attract the new innovators and entrepreneurs who are passionate about their enterprise but are being held back for reasons of inadequate financial and mentorship support. Navodyami is an innovative program, started in 2011 and geared to create, support and scale micro-entrepreneurship at the bottom of the pyramid.

A Glimpse of Development Dialogue